Today was, am… not work day, I didn’t even look at the timetable.. shame on me. I’ll write a post-mortem tomorrow detailing my next step.

I spent the day researching the american constellation space program that Obama terminated (I blame Microsoft) which involved going back to the moon by 2030 using our new technology. It’s embarrassing that human space equipment in operation now are mostly 50s and 60s technology, very outdated. Alas, it has been canceled even though it entered the final stages of development.

The idea is developing a new kind of carrier rocket (Ares), and a space ship (Orion). Both are multi-stage.

Ares is a 5 stage space vehicle, the first 4 stages are propellant booster stages, the 5th stage is something called mass simulator, which I’m guessing is used to simulate the actual payload, the space ship, at testing stage.

As for fuel, the first stage uses solid rocket fuel, which is derived from what space shuttles used, while the upper stage uses liquid hydrogen and oxygen. 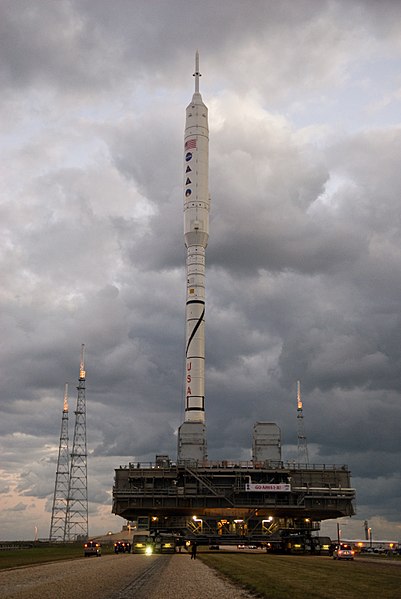 Now this is kinda of a dumb rocket, its task is to lift the space ship to escape velocity into space, self-disassemble and fall into the ocean. The biggest difference in operation compared to the old Space Shuttle is that this one has a smart emergency system allowing aborting the mission in case of catastrophic failure in mid air and returning the carried spacecraft and astronauts safely to earth. This video is showing the latest test of Ares I-X, and the emergency system at work, the count down before launch is amazing!:

The more complex part of this project is the Orion spacecraft. This would perhaps be one of the most advanced spacecrafts built specifically for crew exploration. There are certainly more ambitious designs out there, like the good old Project Orion (different Orion) for example, which uses crazy mini-nuclear explosions for propulsion leaving a trail of deadly radioactive fallout if it operated near the magnetosphere of earth. But they are mostly on paper. While the new Orion was mostly ready for production when the plug was pulled on the constellation program. Its first test flight was supposed to be in 2013.

Orion is known as the Crew Exploration Vehicle (CEV) which includes much better life support systems and more advanced computers compared to all other previous crafts.

You can find much more information about Orion if you are curious, take a look at this video from NASA about what it’s about.

To get an idea how the whole mission was supposed to be carried through, here is an animated demonstration.

Through this almost research, I stumbled upon Nazi UFOs conspiracy theory, you see the Nazis somehow managed to establish contact with aliens from a galaxy far far away, and during the contact they managed to get information about super-advanced technology that we don’t know shit about apparently, then they made a bunch of flying saucers with it! when they realized they can’t hold anymore and they are losing, they just took their flying saucers and flew to the dark side of the moon, where they now exist, developing advanced deadly technology and planning to one day take over the world. ROFLMAO.. wanna see how this would look like? a Finnish studio is working on a comedy movie about it, here is one of their trailers. enjoy!

Ok, it’s a completely crazy idea that makes my head buzz with internal Darth Vader theme music, but let me tell something to you.. It makes for a HELL-ova game idea!

HUMANITY? I AM DISAPPOINT, WHY U NO GO SPACE? :(