This LD is more awesome than the one before it even though I didn’t think beating LD21 was possible, until now there are over 700 games made in 48 hours around the theme ‘Alone’! that’s just impressive.. its gotta be a world record.

As I’m checking the games now, I’m finding truly wonderful games, and since the theme ‘Alone’ is rather abstract, the ideas vary widely.. yes you can still find many generic side-scrollers, but also many innovative stylish games built around a deep concept.

Like for example, how about a lonely soccer player fighting aliens with a soccer ball? check :D 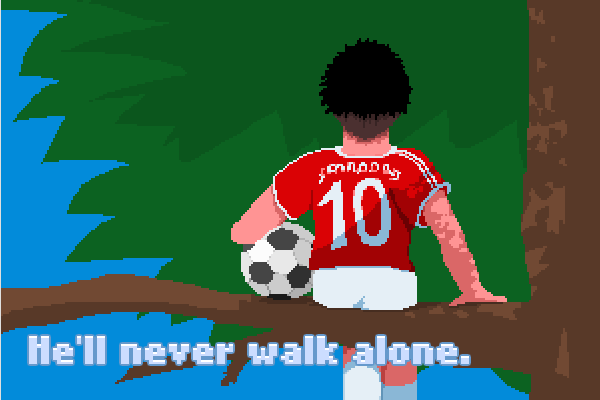 Here’s how it went:

“Alone” is tricky to design a game around, and I never was one to go with just another generic game so I spent around 4 hours trying to come up with a good concept, by the end I had 6 different concepts, and non but one was actually something I’d like to play myself.

And even though I set out with the intention of doing something minimalist and compact, the concept I liked was very not like that.. I don’t know why I resist doing simple things that much, well I think I know but we’ll get to that later.

The concept I went with is for a game about standing alone in protest for your rights which eventually will lead to a revolution, that’s a scary concept hehe 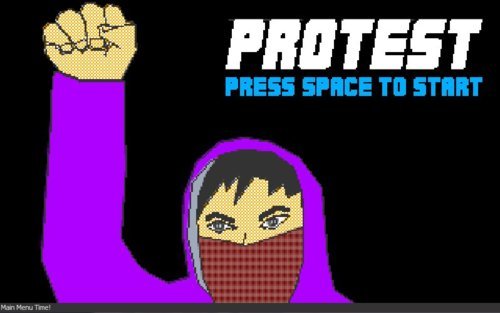 I went for limiting the artwork in hopes that it will make art creation go faster, the resolution was 320x200 scaled 2.5 times to fill 800x500 swf size, and I’m restricted to use 16 colors only (Inspired by EGA era displays).

I got two different possible art styles, I went with the one on the left of course: 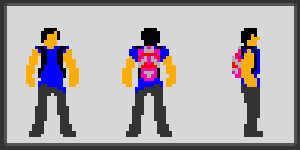 Because it’s a bit detailed for a 48 hours game, I thought I should only do the man animation, trying my hand at animating this took me some time of trial and error:

No hands! yes well, the hands have their own separate animation, this way you can hold protest slogans, shield your face, throw a rock or something, while running :D

Then I started working on the game mechanics, during each protest you have to actually clash with the riot police for territory control, handling tear gas and water cannons etc.. while protecting and helping your fellow protesters who chose to stand beside you and fight for the same cause. I decided to include support for both Arabic and English, and to only concentrate on the main components because again the concept is too big.

I don’t check the news often, for whatever reason I thought I should see what’s going on while having dinner.. and I saw what’s going on in Egypt these last few days and I didn’t like where things are going. That put me in a situation, since I’m a non-egyptian living in Egypt at the moment, doing a game like this now might not be a great idea even if it’s not meant to be specifically about Egypt rather about protesting and peaceful revolution in general, so I suddenly got really demotivated and finally decided to just stop and leave this thing for a more suitable time. I really dislike getting mixed up in politics or similar issues and I’m afraid a game like this will find its way into that somehow even if I keep it English only.

By that time, I got only 1 day.. so back again I tried to come up with something simple that can be done in a day, minimalist resistant was still there and I ended up doing nothing yesterday :(

So that’s that, I failed LD22. Hopefully next LD I’ll do something friendlier, plus I really liked how some games tell a story and design a game around that (for example: Last Breath).. I should learn how to create a game around a story rather than trying to come up directly with game concepts that relate to a theme. Actually, all the games I made so far don’t tell a story, this has to change.

So I was making an LD22 entry just like you, but then I took an arrow to the knee.. :D